How to get no recoil in pubg pc steam ( simple steps )

Always use left side ctrl, Alt, Shift keys on keyboard to change values

How to get no recoil in pubg pc steam ( simple steps )
There are few ways to get no recoil in pubg pc steam among which most simplest is with RCL no recoil engine. Which is explained in step by step manner here.
But before jumping in to the tutorial download your RCL no recoil from My Downloads
Open PUBG steam and Go into settings.
Go into graphics settings and change full screen mode to Borderless. This is necessary for automatic no recoil activation upon detecting the weapon in hand.

Now go into Controls tab and make this change
1. Hold to ADS
2. Toggle to crouch 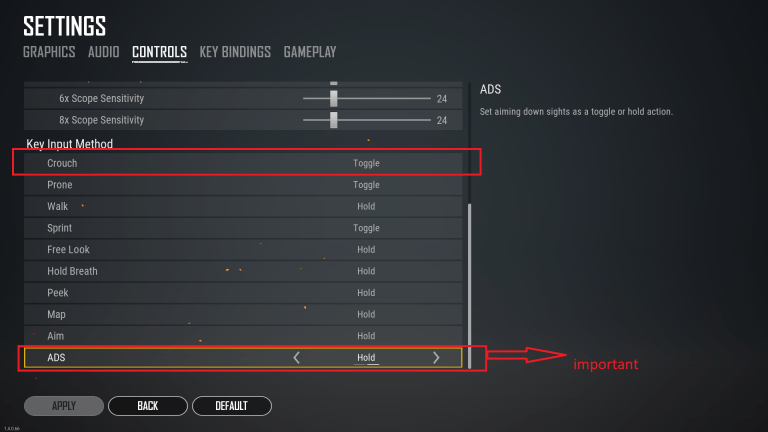 Save everything and go into lobby
Start the RCL engine and Enter into Training lobby.
1. Open RCL no recoil Engine and Click on start Button, After that you can minimize the RCL no recoil.
2. Go into training mode and Equip M416 and Red-dot Scope.
3. Press F1 to activate m416 no recoil.
4. Now Stand near a wall and fire.

Don’t forget to save everything using Ctrl +Enter

for other weapons if need adjustments then change weapon specific sensitivity.

Setting up higher Scopes like 2x, 3x, 4x, 6x. ( configure this before using )
1. Equip a Gun , lets say m416
2. Equip any higher scope.
2. Double click middle mouse button to select the no recoil for that scope.
3. Try firing and if bullets going up increase scope multiplier ( you can view all available shortcuts by pressing Backspace )
4. you will have to do the same thing with other guns as well.
5. You have to do this for each gun and each scope separately.
Don’t forget to save everything using Ctrl +Enter

Testing Autodetection of pubg guns ( 1080p resolution )
1. Open RCL settings and toggle autodetection to ON and then start the RCL no Recoil macro.
2. Then go into training mode and equip any 2 weapons.
3. Press TAB to open inventory , it will automatically detect the guns and activate no recoil for the gun.

So TAB is the detection trigger , whenever you press TAB the RCL engine will scan the screen to detect the weapon and activates its no recoil.
Make Autodetection for other resolution.
This step is better explained with video tutorial so watch the below video

Don’t forget to disable attachments if you are not equipping any attachments
as there are 4 recoil pattern for each gun. ctrl + k and ctrl + l are the shortcut keys
important point

Regarding fine tune :—> you don’t have to change fine tuning as we have already adjusted it for you.
however lets understand what it does!

finetuning ; it will increase the number of nodes in the recoil pattern , so it will reduce screen shake but at the cost of pattern accuracy , So increase it just enough to get better control. Dont increase it to the maximum.

Some Q&A from users bought

hi i downloaded it thank you but by default 2x, 3x, 4x, 6x recoil settings are not configured I guess? It doesn’t bounce with reddot but bounces with 2, 3, 4, 6x?

Yes default scope multiplier for all scopes are set to 1.

You can change those scope multipliers.
For example 3 x will need a multiplier to set somewhere around 2.5 to 3.5. it will be different for different people as everybody’s game sensitivity is not the same.

we need to set and save separate multipliers for Alt+K and Alt+L, right?

Alt + k and Alt + L are not just multipliers.When you enable alt + L or alt + k or both.
It completely changes recoil pattern.

So basically for a single weapon there are 4 recoil patterns .
1. With out any attachment
2. Only compensator
3. Only vertical grip
4. Both.

Fine tune setting is adjusted with page up and page down. What exactly is this setting?

RCL engine will intelligently find inbtw pattern points. Usually with 30 bullets, number of patterns nodal points will be 30. So moving from one point to other point will be a big jump thus causing higher screen shake , which you can see with most of the recoil macros out there on internet.

So by  increasing fine-tuning RCL engine will  increase these inbtw points thus reducing the screen shake. ( Basically for 30 bullets recorded pattern —> it can have 100+ nodal points )

But it may also reduce pattern accuracy.
So pls don’t increase more than it required.

We have already configured it to a fair value for pubg steam macro , but if you buy our universal predator macro you can adjust this value to reduce screen shake.

Thankyou
Products
About Us

RCL Macro Engine is a powerful no recoil engine which can be used to make no recoil scripts for any game without touching a single line of code. You can request us for a specific game through contact form.